Have they no shame?

Dave Budge takes on the silliness of Jay Stevens for being outraged at the Free Republic for pointing out that the spokesman that the Democrats relied on, a twelve year old boy, to reply to Bush's veto of the excessive SCHIP bill, is part of at least a middle class family.

Some of the amusement, is when Jay says:

First, this particular family has nothing to do with whether CHIP is a good program. We don't know 'nuthin' about the family. Anecdotal evidence proves f*ck-all.

So, the Democrats have this twelve year old kid who asks to rebut Bush, and they just say, "Sure!" "We don't know 'nuthin' about this family?" Oh yes we do. We know that they are being cynically manipulated by the Democrats. We know that the Democrats are reverting to the old school, "It's for the children" argument, because so few people are willing to think or ask questions. And using children has worked so well for them. Remember all the kids that would start crying because they knew that they were going to be killed in a nuclear war started by Raygun? Those kids knew nothing about the real situation, but they were being scared unmercifully by the Democrats for political advantage.
But Jay's comments that:

You can pull this rhetorical bullsh*t, slime the folks getting CHIP as undeserving n'eer-do-wells sucking off the teat of government,

Harry Reid spokesman Jim Manley complains: “This is a perverse distraction from the issue at hand” and accuses questioners of attacking children.

Are you seeing a pattern here? Obviously the marching orders went out, and Jay and his ilk must realize how dangerous for their silly argument it is to be taking advantage of children in this way.

Child abuse I tell you!! 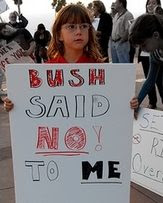 None of this matters anymore, Al won the Nobel! I'm all atwitter..