President Obama, after careful poll testing, has decided that all of the world's problems are Bush's fault.  While it is true, that Bush drags down the polls, the general ideas of the Republican's are more popular than those of Obama.  Where the Democrats really run a risk, is that people will begin to remember how their life was better under Bush, than it is now with 9.5% unemployment, stagnant economy, Trillion dollar plus deficits, and losing this administration's "correct war." 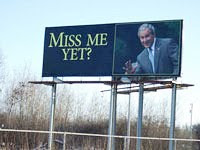